As the world gears up to experience a revolutionary breakthrough in transportation, cutting down time and cost, India is one country that can capitalise on it, as it surges ahead as one of the fastest growing economy.

The Hyperloop Transportation System is increasingly called the fifth mode of transportation, after air, water, road and rail. Here, the capsule moves inside a tube with low air pressure and, like a jet plane at high altitude, experiences very little air resistance. The entire tube system is built on pylons, thus lowering the cost of land acquisition, making it impervious to weather conditions, earthquakes and crashes.

On 28th Febuary, 2017, Hyperloop One, one of the two companies vying to build the world’s first Hyperloop by 2020, announced its intent to begin operations in India by 2021, taking Twitter by storm, as per Konnect’s report:

Bibop Gresta, chairman and co-founder of Hyperloop Transportation Technologies also states, “The perfect nation for a Hyperloop project is one that has a large population and a lack of existing infrastructure. In such cases usually there’s a need for a more efficient, quick and profitable mode of transportation. In India, we found all three. India has the political will to embrace innovative solutions, making her a great candidate to be one of the first countries to have a fully operational Hyperloop Transportation System.”

Among the top influencers talking about Hyperloop online, there are both ministers in the current government (including Railway Minister Suresh Prabhu) as well as leaders from the opposition.

If Hyperloop Transportation Technologies and Hyperloop One’s plans are approved, these two companies could leapfrog transportation technology in India. In the face of rapid urbanisation, India’s existing infrastructure and facilities are falling alarmingly short. India has a transportation crisis on its hand.

Its 164-year-old railways are still remarkably slow, with an average train speed of 54km/hour and are in desperate need of modernisation. The roads aren’t the best either, one person is killed in India every four minutes in road accidents. The country’s airports, too, particularly in the metros, are struggling with congestion and capacity shortage.

Besides, it’s not just the infrastructure gap that Hyperloops could bridge. “There is a very big argument that the employment of so many people to build the line itself would be a tremendous economic boost, like in the US they built the freeway system in the 1950s,” Craig Hodgetts, a professor at UCLA and the principal and co-founder of interdisciplinary architecture and design studio, Hodgetts + Fung, said. This reflects in the sentiment analysis report from Konnect’s tool, which shows an overwhelming 97% of the online population being either positive or neutral about the technology! 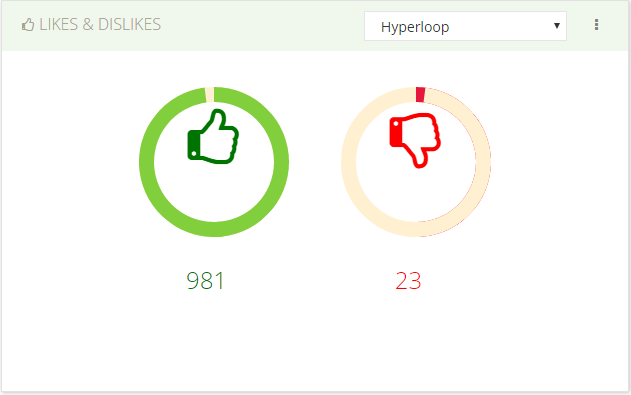 Hodgetts also reckons that the Hyperloop would play a crucial role in connecting the length and breadth of India.

Hyperloop One, which promises to move people and things at the speed of an airline for the price of a bus ticket, has asked Indians to pick one from five proposed routes. The proposed routes include Delhi-Mumbai, Mumbai-Chennai, Bengaluru-Chennai, Bengaluru-Thiruvananthapuram and Mumbai-Kolkata. Hyperloop One will decide by the end of this year whether it's feasible to run it in India after studying the market. According to word cloud reports from KonnectInsights, the Delhi-Mumbai corridor is what Indians are most excited about. 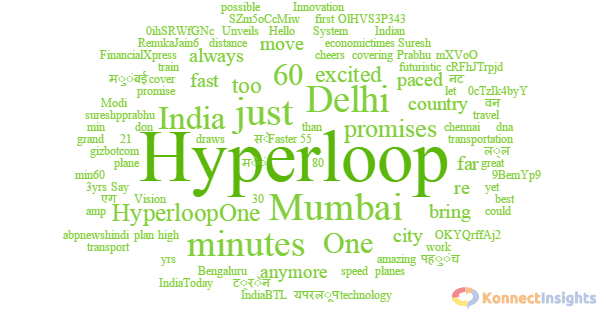 The firm will locally source a significant part of the components including steel if it decides to move ahead with the plan, CEO Rob Lloyd told Bloomberg.

A Hyperloop route linking Mumbai and Chennai region via Bangalore, will not only link the East and West coast of India in terms of trade and open up opportunities in domestic and foreign trade, due to India’s unique peninsular region, but will also enable the building of a passenger route on the same acquired land, thus leading to less infrastructure costs, less land acquisition costs and huge economic benefits by enabling massive amounts of both cargo and passenger flow along the same corridor.

According to Gresta, Hyperloop will redefine the very concept of transportation. Airplane, high speed rail, etc. have altered our way of living but the future is about reducing dependency on fossil fuels and other conventional forms of energy. With the massive minimising of travel time, the Hyperloop technology gives the option to live in one city and work in another. This will potentially lead to decongestion of cities and urban areas.

Meanwhile, critics of Hyperloop claim that at such high speeds, there could be health hazards arising from travelling in Hyperloop (which can be built on the ground, in tunnels or higher up on pylons). Dismissing these concerns, Earle believes that “the travel experience will be similar to what people have in air travel. Only, there would not be any turbulence because things here are happening in a controlled environment”.

Hyperloops are still in their infancy and haven’t been tried yet anywhere in the world. Tunnelling remains expensive. There is no saying how ordinary humans will respond to being in windowless containers with that level of acceleration and deceleration. Or what happens if there is a malfunction or an attack on the tubes. It might be more appropriate for freight, but again, it is yet to be tested.

Secondly, India is an earthquake-prone area. More than 54% of India’s land is vulnerable to earthquakes currently, and swathes of India, including in states such as Delhi, Maharashtra, Jammu & Kashmir, and Uttarakhand are among the “very severe intensity” or “severe intensity” zones.

Thirdly, acquiring large swathes of land is a task in the country. Moreover, red-tape typically holds up big projects. We have seen how for decades, the process of land acquisition has stumbled in India, with a large number of projects stuck due to this. India’s bullet train plan is an example. Since taking power, the Modi government has tried, unsuccessfully, to amend the laws to ease this process.

On whether it will make sense for India, G. Raghuram, professor, Public Systems Group, at the Indian Institute of Management, Ahmedabad, aptly puts it, “the concept of Hyperloop is a good one, as it can reduce energy consumption significantly and speed up transport.” However, he cautions that from a safety point of view, the technology is yet to be proven. Also, with just 3 capsules with 7-8 people each, it remains to be seen how useful it will be for a populated country like India that needs to transport people on a large scale.

Reflecting the novelty of the technology, rather than its practical approach is the location map from Konnect, which shows most conversations in the tech hubs of the country in Bangalore & Pune.

Still, it’s an exciting futuristic technology to look forward to, and the prospect of travelling from Mumbai to Pune in 20 minutes or Delhi to Mumbai in one hour, without flying, is undeniably attractive.