As the Lion celebrates its second birthday, there is a nation that wants to know what it has been upto in the past two years. Has Make in India managed to spearhead its objective and make India a primary manufacturing hub in the world?

The Department of Industrial Policy and Promotion mentioned that 127 ease of doing business reforms have been implemented over the course of these two years. India’s rank in the World Bank’s Ease of Doing Business rankings has gone up from 134 in 2015 to 130 in 2016.

Post the launch of the Make in India initiative, India became the front runner in 2015 in terms of attracting foreign investment, having seen an inflow worth $63 billion, leaving behind the US and the People’s Republic of China. India’s top five FDI-friendly sectors comprise services, construction, computer software, hardware and automobiles.

Inspired by Prime Minister Narendra Modi's 'Make in India' initiative, leading Indian technology startups have said that there is a need to focus and promote the building of software products in the country, demand for which, according to them, could touch around $500 billion over the next five years.

Speaking at the Global Mobile Internet Conference (GMIC), Naveen Tewari, founder of mobile advertising network InMobi and founder member of Indian software product industry thinktank, iSpirt said, "It's a market opportunity that will be there, whether we have to import it or whether we create it, is a decision we need to take."

“One of the most important measures for creating software capabilities in the country would be to involve Indians who moved overseas in the last few decades due to lack of opportunities, and reverse the ‘brain drain’ that the country has seen,” said Sachin Bansal, co-founder and CEO of e-commerce major Flipkart.

According to a report by professional services firm Ernst & Young, globally there were mergers and acquisitions (M&A) worth $66.6 billion in the software products space during January-March 2014. However, as per the Indian software product industry thinktank iSpirit, there were only 159 M&A software product deals that happened in India during the same period with a combined value of just $1.78 billion.

According to a report by DIPP, India elevated its position to No. 2 in the “Tech Start-ups” category and these startups need equal attention in terms of finance. The Government of India therefore launched the Electronics Development Fund to support these startups.

Former CEO of Infosys Nandan Nilikani, in an interaction with YourStory, said, “I am not sold on the idea that manufacturing alone can be the solution for India’s growth. It is only part of the larger solution that India needs.”

When Dynamatics Technologies – a Bengaluru-based component manufacturer – signed an agreement with Airbus to make a wing component, it was an important moment in Indian manufacturing. It signaled that even a components’ manufacturer could aspire to become a preferred supplier to a global OEM.

While India has been in the forefront as an offshore destination in terms of offering information technology (IT) services to global clients over the last several years, it is considered as a laggard in terms of developing software products. However, there has been an increase in activity in this space over the last couple of years which has caught the eyes of global players. Several global companies are now eyeing participation in the software product ecosystem in the country.

In a move that marks a radical shift in India's foreign investment policy so far, the Union government, in June 2016, liberalized the foreign direct investment (FDI) regime with the objective of providing major push to employment and job creation in the country. The move makes India the most open economy in the world for FDI equity, where inflow has undoubtedly swelled since Modi came to power. An analysis of the data released by the commerce ministry however shows that ‘Make in India’ has, so far, had little to contribute to the upswing.

As the government points out, Modi’s plan has attracted significant foreign investment. Electronics manufacturer Foxconn announced plans to invest $5 billion in a factory in western India, while GM unveiled $1 billion in planned investments on the subcontinent. Other companies, including Airbus and Hyundai, also announced major investments in India to expand their global manufacturing footprint. Overall, foreign direct investment increased 39% over the last 18 months, making India the number one destination in the world for foreign investment.

The Indian IT industry is trying to graduate to a high value economy and that would come with a few negatives such as a stronger currency that will impact some sectors, but overall it is a great benefit. 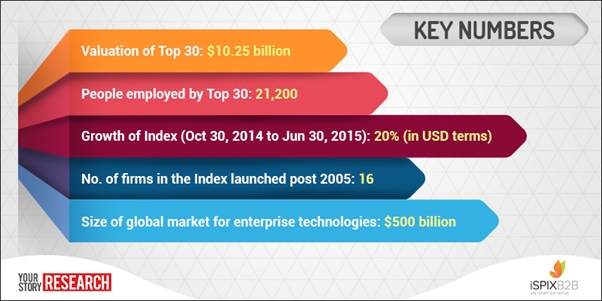 The top 30 enterprise software companies in India have a combined valuation of over $10 billion and together they employ over 21,000 people. In short the Indian B2B software industry, comprised of over 300 companies, is thriving. Six of the companies in the Top 30 were launched after 2010.

This is the primary finding in the Indian Software Products Industry Index – B2B report released by industry think tank iSPIRIT on Thursday.

“There is a different breed of companies coming in. There are more horizontal product offerings now and that is where Silicon Valley companies like Microsoft, Salesforce and SAP have found success,” said Dev of Lightspeed. While a majority of the companies on the Index are still vertical focused, about 40% are multi-category solution providers.

A majority of the post-2005 generation of startups have raised venture funding, unlike software companies of the previous generation that were bootstrapped.

The report also reflects the trend of startups being domiciled abroad rather than in India. The report shows that 67% of the top 30 is domiciled in India, but a large number of the younger companies are domiciled in the US and Singapore. The US accounts for over 16%, Singapore 13.3% and the UK 3.3%. Even consumer Internet companies like Flipkart are also domiciled abroad!

However, with fast growing sectors like e-commerce, Indian companies will become important for many B2B software providers. “My personal viewpoint is that a growing set of high-growth Indian companies across sectors from e-commerce to retail and healthcare will not build software internally and they will buy from third party. They are already doing that. This will help these B2B companies,” said Dev.

Freshdesk’s Girish is of the view that success will breed more success. “If the best practices of scaling companies can be shared by those who have done it before, we can see more success stories emerge.”

Assuming "Make in India" works and companies around the world make India their manufacturing destination, the following happens:

To conclude, the IT industry should have nothing to worry about Make in India. If it works out we are on a completely new career path. And whenever we think of the economy, we have to just imagine the Butterfly effect. Every change we make changes the underlying system in various ways.