Meme marketing has emerged as one of the most potent forms of social media marketing strategies. While in-your-face advertisements are often ignored, it’s tough to scroll by something hilarious on social media feeds. We all love to share a laugh with friends, and well-made memes with their quirky humor, perfect for sharing. The brand story, subtly woven into the memes, travels far and wide, creating a strong impact at an insignificant cost.

In this era of the 24×7 news cycle, the competition for viewership has reached alarming proportions. Stories are thrust into the limelight with crazy titles and dramatized setups. Anything ordinary gets immediately cast aside while only the extreme and outrageous get the views, likes, and shares. With most millennial users preferring to have a fun time on social media, ridiculous videos and insane humor bordering on stupidity have become the staple fodder for consumption.

The most significant advantage of meme marketing is its magnetic visibility. Memes never go unnoticed as it is impossible to resist a funny image with a hilarious message. Brands that have successfully made their audience smile, if not laugh, have built up a loyal following on social media. This is the most inexpensive way of enhancing brand value by making the brand more relatable.

The latest viral meme to hit the social media streams across India has been #Binod. It centers around a comedy video on YouTube titled ‘Why Indian Comments Section is Garbage (BINOD).’ A channel named Binod Tharu had posted his first name BINOD in the comments section of various popular YouTube videos. The sheer absurdity turned into a raging trend across social media platforms with brands like Netflix India, Amazon Prime, Disney HotStar, Airtel, and SBI joining the trending hashtag with hilarious posts.

In contrast, images of Sammy Griner, a smiling, sandy-haired success kid, was an instant meme material after his mother uploaded a picture of a satisfied exuberant baby with a clenched fist. Brands like Microsoft, General Mills, Coca Cola, Virgin Media have used the since copyrighted image for hugely popular advertisements on social media. It was an ideal case of using positivity and determination inherent in the image for brand promotion, accompanied by witty one-liners. The campaigns underlined the importance of preserving the innocence and fun element of images for ultimate success. 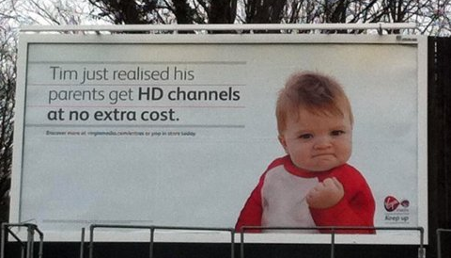 While on the other hand, fashion major Gucci forayed into the volatile world of memes with its #tfwgucci campaign for its high-end watch collections and experienced an immediate disaster. The memes were trashed online by Gen Z users as cringeworthy, awkward, and “missing the fun quotient.” Another brand to fall through meme marketing’s deep crevices was House of Fraser’s with its #Emojinal campaign. The sudden shift to this cranky tone of marketing made some of their niche audience wonder whether the brand has been hacked. The surprise and shock element in the photoshopped image marketing proved a bit too weird for the centuries-old brand’s followers. 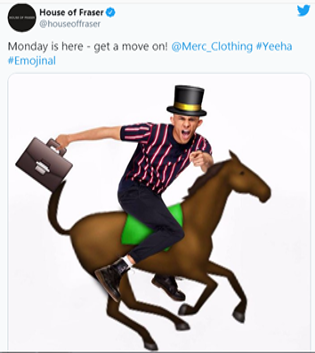 A trending meme generates a lot of traction on social media but can damage a brand’s perception, if not done diligently. Efforts to resonate with youngsters through hip-hop wordings, trending hashtags and absurd imagery make a brand appear naive and insensitive. The hashtag #WhyIStayed became popular post the Ray Rice domestic abuse scandal and trended on social media platforms to support domestic abuse victims. It was least expected for a pizza brand DiGiorno Pizza to misread the context and use it in one of their advertorial memes to trend on Twitter. While a million apologies poured in, the damage was already done.

The urge to send in a quirky message to customers and stand out among competitors dragged fast-food major Wendy’s into a meme fiasco over fresh beef usage. In a bid to post a lightning-fast response to questions on social media, Wendy uploaded a meme with Pepe the Frog’s image, dressed up as Wendy’s mascot, used by white supremacists -a declared hate symbol. The fall from grace was dramatic, and the brand had to follow it up with apologies that cut little ice.

This brings into focus the importance of putting an adequate filtering mechanism in place before opting for social sharing. All things funny don’t necessarily make a brand look smart. Memes convey instant messages through powerful, eye-catching pictures, and the impact on the brand image should be analyzed carefully before going live.

Efforts to sensationalize campaigns with loud and absurd meme content often makes a brand look stupid. Meme marketing is highly effective in making a splash and can get users talking about a brand if accompanied by subtle wit and uniqueness. Repeated usage and attempts to bulldoze the audience with a flurry of absurdity demonstrates a lack of respect for consumers. All brands love to create a buzz and to be talked about on social media- it has to be remembered. However, that brand image should not fall prey too hastily made memes.