TweetDeck is getting much-needed core Twitter upgrades including support for GIFs, polls and emojis which will be rolling out in the coming few months as announced by Twitter recently. The features mentioned above have been an extended part of the desktop version until it was shut down last year.

TweetDeck is finally catching up with the desktop version of Twitter as it will be supporting GIFs, threads, polls, emojis and image tagging as well, but they have mentioned in a tweet that it will be in a testing phase as of now and will not be accessible to all although users can expect the new features to arrive at some point in the coming months. 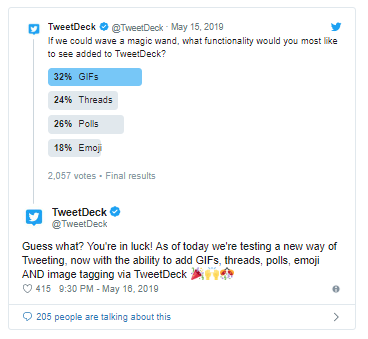 Earlier all these features can only be added from the desktop version of Twitter and could have been viewed in TweetDeck (but not be created).

What More Changes Have Been Introduced In TweetDeck?

TweetDeck has eliminated the ability to schedule tweets from the tweet composer that was recently upgraded.

You have the option to revert to the older version of the tweet composer to use the scheduling feature for tweets, but in that case, you will not be able to use the new features which were recently added. 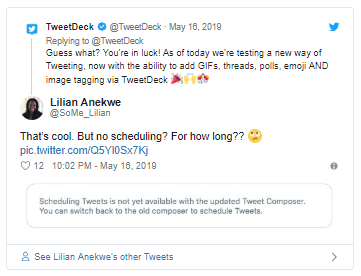 In the above image, you can see that it clearly states that scheduling tweets are “not yet” available with the updated Tweet Composer, which suggests that it will be available at a certain stage later on, most probably after all the features have been tested and analysed.

The problem with Twitter is that it has a habit of incorporating core features into the main app and then sooner or later they bring the axe down on it. Let’s hope it does not happen in this case.