Facebook added a lot of new features to its Messenger application like support for Boomerangs, a Selfie Mode and a brand new format of Augmented Reality (AR) stickers.

A few months ago, Facebook had made a big announcement about its Messenger app redesign to simplify its app for the users. The social media giant has now declared that it is adding two more camera modes and support for Augmented Reality (AR) Stickers. Facebook Messenger after the update currently has five different camera modes: Normal, Video, Text, Selfie and Boomerang (which allows you to shoot two second short videos and then play in a loop in a forward and backward manner).

Well, it is still a lot less than when it comes to its photo and video sharing social networking service “Instagram”. Instagram Stories has nine different camera modes. Well, the latest update puts Messenger into the top apps when it comes to comparison of camera features.

These different camera modes are very well-integrated into the Messenger app and it leads to a smoother and easier use of the camera features for the users.

The new upgraded Messenger also presents to its users the new Augmented Reality (AR) Stickers, or rather just support for AR stickers. Due to this new feature, your favorite stickers of different characters can now be moved out of Messenger and shared on any photos or videos. All you have to do is just press on the camera icon placed next to the sticker and insert it as an Augmented Reality (AR) object on any kind of photos or videos. 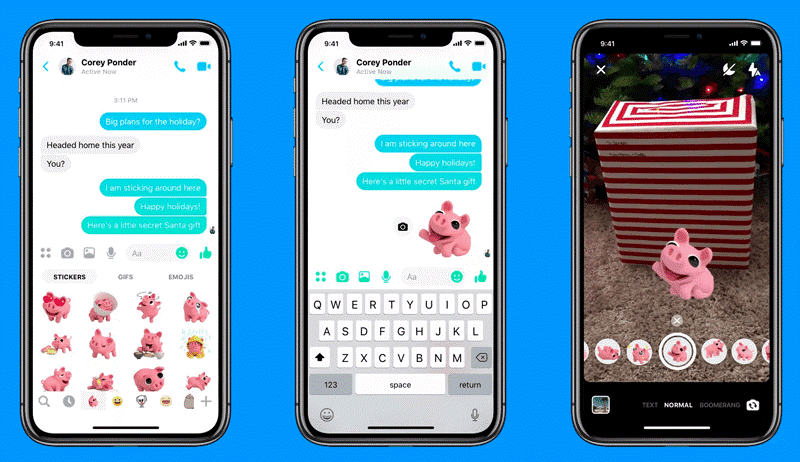 These latest features are a part of Messenger’s latest app upgrade which should roll out to all the users globally in the upcoming few weeks.