The idea behind the two platforms is exactly the same. Both are marketing platforms intended to help businesses drive traffic, reach audiences and increase their earnings.

Each platform has its own advantages, disadvantages and characteristics, which makes them unique from one another.

Microsoft now has three search engines under their belt: Yahoo, Bing, and AOL so once you advertise on a single platform, your advertisement is viewed on all three platforms.

Both Google and Bing have their own set of tools. One of them being the keyword research tool. The difference between both platforms is the amount of traffic for keywords, which is relatively very low on Bing.

It is well known that Google has dominated the search engine marketplace and has a higher search volume and reach, but by no means, Bing is in the backseat, it is growing at a very rapid pace. Just have a look at this very interesting fact: Bing Ads reaches 63 million users that aren’t reached by Google Ads, so by no means, you can undermine Bing Ads. 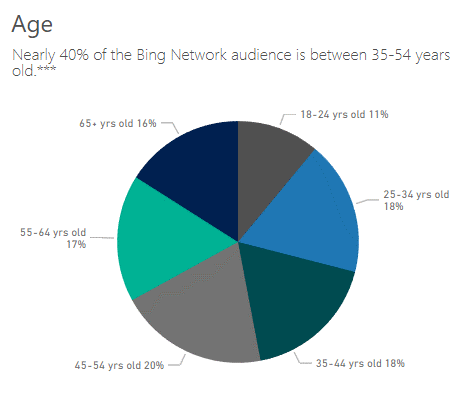 Along with greater visibility, Bing enables advertisers to reach an audience that is more educated and experienced. Nearly 40 percent of their Bing Network users are in between 35 to 54 years old.

Budgets may vary from business to business and from advertiser to advertiser, but while running ads, a digital marketing agency found out that Bing Ads spent only 20-35% of it counterpart’s campaign equivalent. Considering all the facts, it is said that the cost-per-click on average Bing Ads may be up to 70 percent lower in comparison to Google Ads.

When comparing the prices of every ad platform, it is important not to forget that Bing and Google do not always receive exactly the same amount of traffic. In some cases, Bing Ads are cheap, but the quality of traffic is also very low, so advertisers find themselves paying more to get a conversion than they do on Google Ads, but since the competition is very low in Bing Ads, it is easier to get more traffic at low cost which in turn results in a better Return On Investment (ROI).

Bing Ads has an improved device targeting option which enables advertisers to target specific audiences according to OS and the device type they own. Additionally, it gives the option of not displaying your campaign ads on desktop computers, if you wish to target mobile or tablet devices only.

Bing is completely transparent while displaying information about its search partners, enabling advertisers to determine precisely where their traffic is coming from. The platform offers comprehensive reports about the performance of campaigns and its metrics on its search partners.

By now it is understood that the most effective marketing plan will be to leverage both the ad platforms. Though Google Ads has more search volume and the amount of potential traffic is very high, but you just cannot leave Bing Ads behind, it boasts of higher positioning of ads and less bidding competition.