Have We Reached Peak Social Media?

If you've observed social media as closely as we have, this question might have crossed your mind. In its early days there was a lot of excitement about this brilliant new medium. Everybody with a decent internet connection was signing up on social media networks like Hi5, Orkut, Facebook, Bebo, MySpace or Friendster. Back then, creators of these networks had figured out that providing a platform for people to connect with each other is the in-thing.

Of all these networks, Facebook found most success because it went on to create something others had failed at. A cleaner look, engaging interface, varied content, gaming options, diverse sharing options & better ability to connect with long lost friends paved the way for Facebook’s rising popularity. Moreover, Facebook has worked harder than any other platform to help advertisers reach their potential customers & monetize social networking. It’s 2015 and it’s safe to assume that the past decade of social networking overwhelmingly belongs to Facebook.

The numbers speak for themselves –

That being said, other social networks like Twitter, Instagram, Vine, Snapchat & WhatsApp have also managed to entice the average social media user. It’s fairly common for users to be active on more than one social media network. Here’s a pie chart that shows the relative share of each of the above mentioned social networks' monthly active users (Based on the latest statistics from Statista.com) 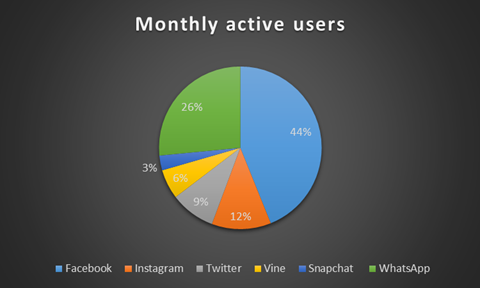 Social media has helped brand marketers to circumvent ad-blockers and user apathy towards search ads. Social networks like Facebook, Instagram and Twitter provide native advertising options to advertisers. Facebook, the dominant social network has reduced the reach of branded content unless advertisers cough up handsome amounts of money. While on the other hand, Facebook has empowered its users to tune out of sponsored content if it starts bugging them or if they don't find it interesting. Advertisers need to be more creative than ever to catch the attention of their target audience. Content Is King and advertisers need to work smarter to guard their empire. They need to get efficient at extracting intelligence from social media to create potent strategies. There is too much noise on social media these days. Brands can cut through the clutter only if they understand the exact dynamics of their audience’s engagement patterns and consequently understand them better.

Although we have not reached peak social media in terms of user penetration, the current modalities of social media engagement are saturating at a fast pace. Brand managers should focus their attention on creating a pull towards their brands through active social listening. Sponsored content and contests may help your brand get off the ground, but a well-researched and concerted effort will help it thrive.

Whether you have a contrary point of view or anything you would like to add, I would love to hear from you.