Enhance Marketing Strategies with a Content Calendar for August 2022

Content marketing has become one of the most effective strategies enterprises have followed recently, resulting in viral campaigns and significantly improving brands’ image. With so much competition in the market, it has become more critical than ever to leverage the content game optimally.

One of the best ways to produce quality content with great consistency is to maintain a content calendar. This allows the entire team to keep an eye on what is next and helps create content well in advance. This way, any last-moment panic can be avoided, and the quality of content would also be better as the team had enough time to execute the plan.

The month of August comes with a lot of festivals and significant days. Brands can create content around the same to increase their reach and create a special place in people’s hearts. Here is a list of some significant events in August for which creating content can do wonders. Also, take a look at some of the brands that were able to capitalize on these major days in their favor by curating incredible content.

On International Beer Day, people are encouraged to gift beers to one another. Moreover, it also aims to appreciate the efforts made by bartenders, brewers, and everyone else who helps serve beer to the masses. People are also encouraged to step out of their comfort zones and try beers from different cultures.

Dunzo used this day to come up with yet another incredible piece of content that won the hearts of many. They created a Facebook post that highlighted beer usage through different months. It was relatable for millions as beer (along with other types of alcohol) was not accessible after the introduction of lockdowns.

Top-notch creativity and the amazing use of graphics made the post a success. Food delivery platforms and other enterprises closely associated with the beverage industry can use International Beer Day to push out quality content.

Friendship Day, celebrated across different countries around the globe, was introduced in 1958 by Joyce Hall in Paraguay. Initially celebrated on August 2nd, it was changed to August 7th later. Yet, in some parts of the world, it is celebrated on the first Sunday of August. Friendship Day holds great significance. After all, friends make life bearable!

This day offers an excellent opportunity to show appreciation to your friends. Nevertheless, it also allows different brands to put out incredible pieces of content that friends can share and enjoy.

Fevicol shared a picture on Instagram that evoked the emotions of thousands of buddies all over the internet. With this post, not only do they promote their brand, but more than that, they share how real friendships are formed. This is what wordplay is all about. 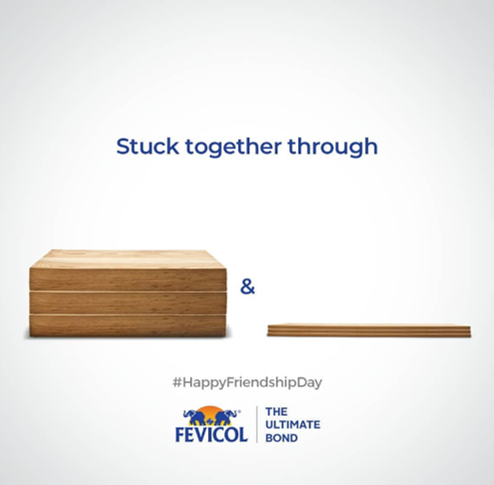 Raksha Bandhan, or Rakhi, is one of India’s biggest festivals and is also celebrated in other parts of the world. In this Hindu tradition, sisters tie a Rakhi (amulet) on their brother’s wrist. In return, they receive a gift. This symbolizes the protection of the brother. Moreover, the brothers also take the responsibility of protecting their sister.

It isn’t possible to think of Rakhi and not remember those heart-warming ads by Cadbury. Every Rakhi season, Cadbury does a beautiful job of creating creative Rakhi advertisements that win the hearts of millions of siblings. For instance, inthis video, a younger brother buys a pack of Cadbury Celebrations for his sister from his personal savings. This scene won the hearts of every brother and sister and left them with an emotional yet loving smile.

Flipkart shared another excellent post on this special day. This post did not only highlight the much-demanded cash-on-delivery feature of the e-commerce platform but also left people amused with another side of the loving relationship between siblings.

Raksha Bandhan is a great festival that allows brands to showcase the relationship between siblings in a creative yet heart-warmingly to improve their brand awareness. Cadbury is the most prominent example of the same.

Independence Day is one of the most celebrated days in the country since India gained freedom on August 15th, 1947. Independence Day in India observes various cultural and national events that keep the Indian spirit alive in the hearts of billions of Indians.

Amul’s social media campaign around the 75th Independence Day of India saw great success after they came up with a touching yet hilarious Instagram post. The idea of “Sabka Fundamental Bite” was displayed in the picture – another great example of excellent wordplay.

There are numerous sales and offers during Independence Day. Thus, brands should prioritize their content marketing strategy to get the attention of the majority of users. This will allow businesses to spread the word about their products and services to the masses. 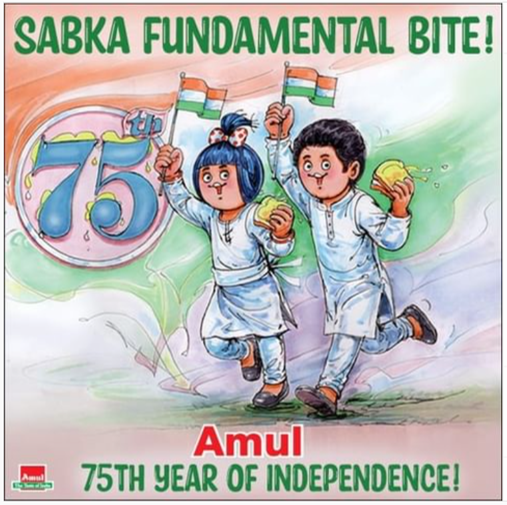 Tata Motors shared an Instagram post on Janmashtami that many social media users found quite charming. In the picture, a peacock’s feather is attached to the car’s key, which symbolizes the flute used by Lord Krishna. This was an excellent use of graphics that clearly delivered a beautiful message.

Many enterprises related to food can come up with creative content on Janmashtami, as Lord Krishna loves to eat butter. With smart copywriting and visuals, brands can create memorable posts for the worshippers of Lord Krishna. 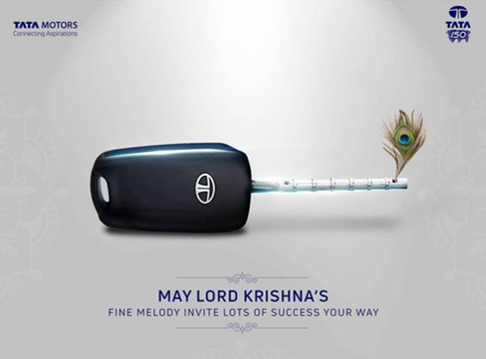 Ganesh Chaturthi, also known as Vinayaka Chaturthi, celebrates the arrival of Lord Ganesh from Kailash Parvat to Earth. This Hindu festival is usually celebrated either in August or September. The festival lasts for ten days as thousands of people across the nation worship the sculptures of Lord Ganesh and finally immerse them in water.

Havmor Ice Creams came up with an exceptionally visually appealing Instagram post wherein the sculpture of Lord Ganesh was showcased with the help of a bunch of ice creams. Many Instagram users found this lovely image very gratifying.

Since Lord Ganesh is the god of beginnings, he is worshipped before any major event occurs. Hence, millions of people prefer to shop on this auspicious day and gain the blessings of Lord Ganesh. Thus, brands that offer sales and discounts around the ten days also benefit from the same. 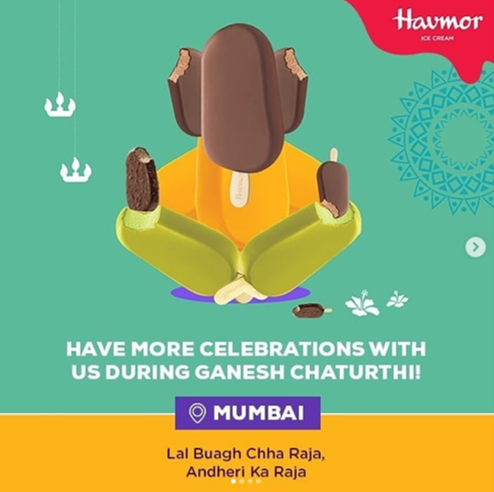 Leveraging modern technologies has been the norm for businesses across all industries in the last couple of decades. Those enterprises that adapt to technology in time gain the most. Today, social media is the one domain that can make or break brands. Hence, it has become more critical than ever to develop a proper content marketing strategy to produce content that will win the audience’s hearts.

As more and more enterprises continue to emerge, the competition for quality content will only rise. Hence, it becomes vital for an enterprise to build a fabulous social media presence to stand out. The good thing is that once a brand has gained a good number of followers, its best content will be shared by existing followers, and many new followers will also get to know about them.

The key to acing the content game lies in consistency and quality. Preparing a content calendar can help achieve this feat. When everyone involved in the content-creating process is aware of the schedule that needs to be followed in the coming month, they will also be able to plan everything ahead. This means more time for idea generation, creative writing, graphic designing, and everything else.

Proper planning with excellent execution will allow the brands to deliver the message clearly, concisely, and creatively – and people will remember the message and the brand over a long period.