Twitter in a tweet on its official handle announced that they are testing an easier way to view profiles of other users without leaving their timelines on iOS devices (as of now). If a user or a Twitter handle is tagged he/she can view it by just tapping on it and it will open up in a new pop-up window. To return to the previous display you just need to slide the pop-up window down and you will be back on the previous screen. 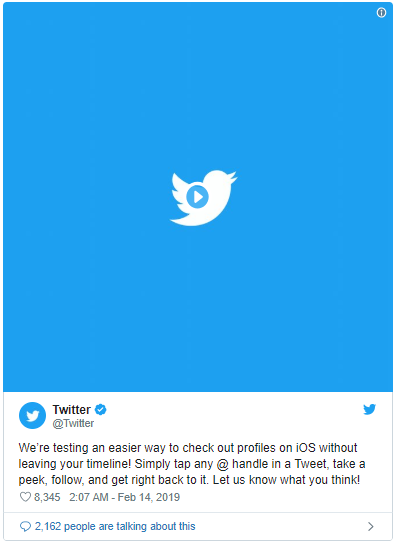 How is it Useful From A User’s Perspective ?

This is a very minor but a useful update as it is going to better the browsing experience of a user who loves to spend his/her time on Twitter.

Earlier tapping on a Twitter handle would take you the user’s profile in that screen itself which can sometimes be frustrating for the user who was already reading a long thread of tweets or had been scrolling down for a while. There are times where people avoid leaving the screen because they do not want to lose track of what they are looking at.

Therefore this update is a welcome addition in terms of user experience and will surely lead to more connections on Twitter.

The evaluation is currently rolling out to iOS users and will be rolling out shortly to Android users as well.