Enhance Marketing Strategies with a Content Calendar for October 2022

Content calendars provide the structure for what a company intends to distribute and promote through its marketing platforms. A well-planned and well-organized content calendar will assist in defining the content marketing topics and publishing schedules to correspond with each social media site’s target demographic and purpose.

Furthermore, a well-organized content calendar concentrates on long-term strategy rather than rapid posts and successes. We can choose the sort of material and the best time to post it by setting up the structure of a content calendar and selecting content pillars.

It’s crucial to understand that each social media platform, including Facebook, Twitter, LinkedIn, and Instagram, has a specific function for a company if it uses them. Therefore, to deliver the content in a way that appeals to each channel’s audience, it is helpful to plan the content schedule with all the platforms in mind. Indeed, a content calendar is a boon in this situation.

The content calendar serves as a guide providing a very holistic vision. Henceforth, here is a list of special days, events, and festivals in October, which can be a perfect starting point for us to plan our content marketing and social media marketing endeavors. Therefore, leverage this content calendar for October to the fullest and maintain constant connectivity with the target audience.

Brands adore telling stories. Utilizing their social media marketing and advertising channels like Facebook and Youtube, they take on a variety of topics and raise awareness among their customer base and broader communities. These efforts occasionally produce touching stories that resonate with people of all demographics. When examining such marketing advertisements, we discovered that some of the greatest ones include senior citizens. Such commercials are frequently endowed with warmth, which makes them interesting to watch. They are filled to the brim with feelings like the joy of learning, nostalgia for past experiences, and innocent delight at events to come. Some also address matters of knowledge, health, and loneliness.

It broadens a business’s potential from a branding standpoint. It gives them the tools to explain how their products are essential to seniors. A layer of gifting is also added to the product use case scenarios, appealing to adults with disposable income to purchase these things and experiences for their parents.

Take a look at the heartwarming ads here.

When brands captured the warmth of age…

Mahatma Gandhi had a vital role in India’s fight for freedom. Among the ideals, Mahatma Gandhi promoted were self-control, endurance, and self-sufficiency. On the occasion of Gandhi Jayanti, observed on 2nd October, brands try to honor this great man by evoking all the ideals Mahatma Gandhi provided to the world.

Gandhi Jayanti attracts brands who leverage the occasion with impactful social media posts and other creatives. For example, Mother Dairy aimed to celebrate Gandhi Jayanti as a dry day through an Instagram post. On the other hand, Lipton Ice Tea was able to integrate its brand into the Instagram creative by combining its fizzy drink product with the non-violence ethos of Mahatma Gandhi. Titan Watches, too, made sure to commemorate Gandhi Jayanti with a powerful message integrated with their product and brand promotion through their tweet.

The design, feel, and overall vibes of these social media posts perfectly captured the simplicity that Mahatma Gandhi preached. Indeed, these posts were able to garner the attention of their target audience and were able to connect with them.

He taught us that true independence is being dependent on ourselves as a nation. Here's presenting Khadi by Titan, a tribute to the father of our nation.#HappyGandhiJayanti

World Animal Day is observed annually on 4th October all around the world. Additionally known as World Animal Welfare Day and Animal Lovers’ Day, numerous brands use social media posts and creatives to spread the word about the value of animals in the biosphere. In actuality, many designed these pieces by fusing the theme of World Animal Day with their goods or services. For instance, Pentel Greece included a puppy in its Instagram post and its products’ images. They tried to emphasize the idea of using Pentel Greece’s goods; people could draw their favorite animals.

On the other hand, Birla Open Minds could grab the maximum attention through an instrumental Instagram creative. It was able to convey through its imaginative take on the World Animal Welfare Day theme that animals deserve affection and should be cared for. In fact, it inspired individuals to take up the obligation of treating all animals with kindness, love, and empathy. 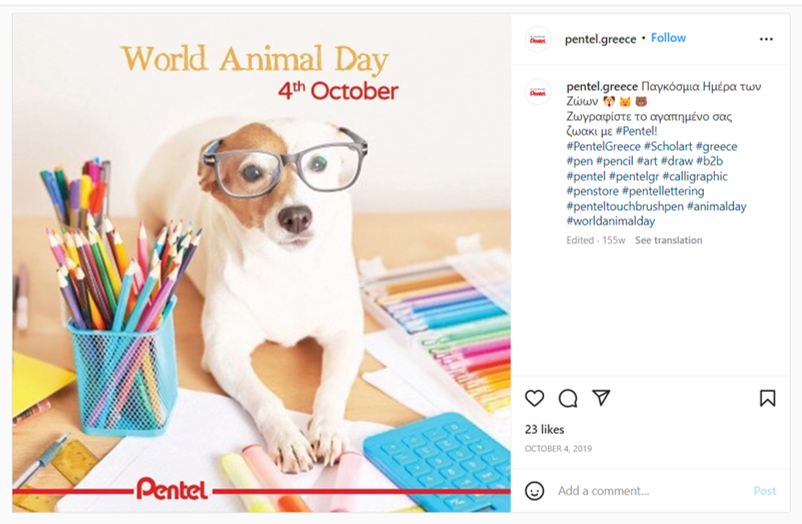 Posts about the Dussehra brand rather from the long format video advertising seen during Durga Puja, 2021 saw an increase in creative and animation short-video posts.

Because Dussehra is significant in Hindu mythology, the Indian audience is aware of this festival’s famous idealogy such as “winning of good over evil,” Lord Ram’s arrow, Raavan and his 10 heads, and others. These characteristics have been combined in brand creatives.

Zomato came up with a small video consisting of a year-long story on how we got over evil with good. 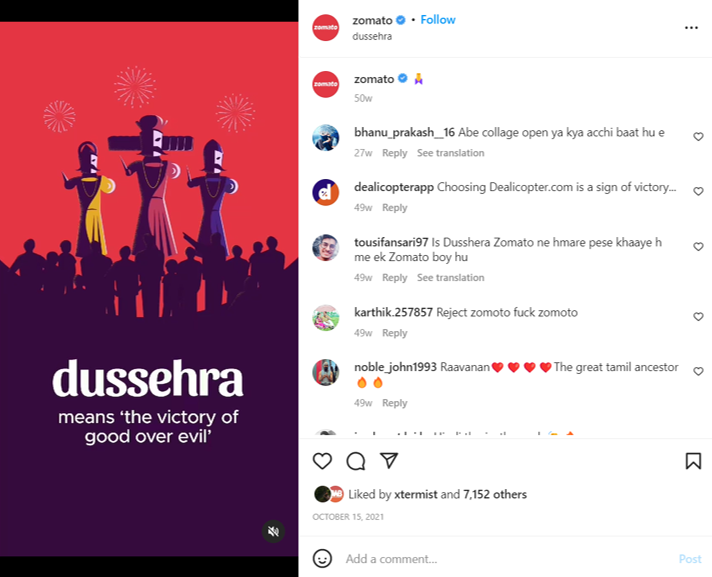 The post informs about the unknown facts of the Indian Air Force and salutes the heroes of the Indian Air Force. Undeniably, the creativity of the post’s content could strike a chord with the viewers, thus ensuring maximum engagement. Giant pen manufacturer brand Reynolds celebrated Indian Air Force Day through a persuasive Facebook post. Furthermore, the creative mingled a fighter jet design into a pen. Thus, this design element immediately grabbed the viewers’ attention, ensuring active engagement evident in the likes and shares the post received.

Every year on the 9th of October, people worldwide observe World Post Day to commemorate when the Universal Postal Union (UPU) was founded. World Post Day is observed annually by the 192 nations that make up the UPU to recognize the value of universal mail and the organization’s contributions to society and the global economy. Every year, the week of 9th October is dedicated to festivities in India.

Indian Oil Corporation Limited embarked on the celebration of World Postal day by posting a short video on Twitter. The animated video highlighted how a physical postal letter is not just a message but an emotion. Indeed, most of the netizens were able to connect with the tweet. Furthermore, the post ensured maximum engagement between the viewers and the brand. Take a look at the tweet here.

Social media users felt an emotional bond of receiving and sending a postal letter through Twitter. The post was able to help the viewers in recalling the allure of sending letters and postcards via the postal services. The post from Indian Oil received a lot of heartfelt responses from Twitter users.

Celebrated on 9 October, World Post Day marks the anniversary of the establishment of the Universal Postal Union in Bern in 1874. Countries all over the world take part in celebrations to highlight the importance of the postal service. #WorldPostDay2021 pic.twitter.com/HkoP7Mj9QY

The purpose of World Mental Health Day is to increase public awareness of mental health issues and to advocate for an end to the societal stigma associated with mental illness, including depression. Each year, several companies and organizations band together to boost these initiatives through educational and inspirational social media content.

Think of launching a powerful social media campaign for World Mental Health Day. On World Mental Health Day, businesses typically provide educational and awareness-raising content to increase public knowledge and foster a sense of community among their target audiences. This is a crucial day for social media marketing, whether we’re communicating with our followers or peers, sharing encouraging quotations, or letting people know we are available for communication. For instance, Mother Dairy urged people through a Facebook post/video to take a short break from their hectic lives and prioritize their health and mental peace.

Surely, they impressively unified their products into the social media post stating the benefits of their products on health. Mother Dairy also posted a creative on Instagram during World Mental Health Day – this social media post humorously had a strong message. Nonetheless, the creativity was interesting and fun, with an important message. Sony BBC Earth successfully managed to drive engagement through their post on Instagram and crisp content and creative text on the importance of having good mental health. 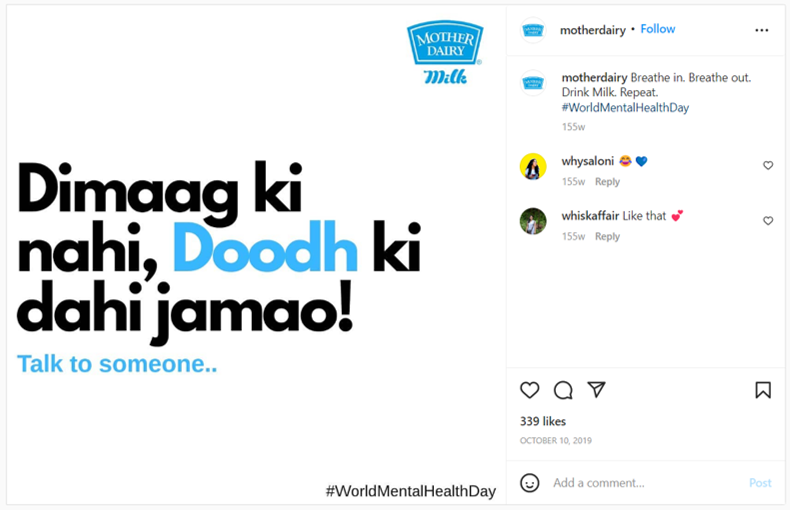 International Day of the Girl Child has been celebrated annually on 11th October 2012. Smart brands embrace this day as an opportunity to showcase themselves as role models or as sources of further knowledge and help rather than merely viewing it as a marketing gimmick. The collection of creative campaigns commemorating the day does this by spreading a message of equality and empowerment. Good creativity resonates with audiences.

It’s a great chance for businesses and brands to take part in the celebration of women’s achievements in all walks of society and life – may it be in politics, business, culture, and community. Here is a look at some of the strong, innovative social media posts by brands that successfully generated the most engagement and spurred people to think critically.

Through a creative film, HP encourages girls to rewrite their tales and pursue their ambitions by observing the International Day of the Girl Child. HP is also launching several social impact activities in addition to the movie, all based on the company’s conviction that technology can democratize the process of generating and disseminating important tales. Thus, HP was able to spin a story around its brand and the International Day of the Girl Child in a very touching manner. Indeed, this huge brand was able to grab attention and engagement. Watch the inspiring video here.

Every year on the 15th of October, World Students’ Day is observed in honor of former Indian President APJ Abdul Kalam, born on that day in 1931. The day’s purpose is to recognize Kalam’s contributions to students and education. The UN established World Students’ Day in 2010 on 15th October.

Many brands use this day to engage with their young target markets on social media. To influence young people to pursue their aspirations, Reynolds India, for instance, posted on Facebook a creative featuring APJ Abdul Kalam with motivational messages and stories woven around their stationery products.

As India recovers from the epidemic, Diwali has become a symbol of hope, empathy, and empathy for all! Seeing this as a chance to spark meaningful conversation, brands responded with “causevertising,” some of which impacted millions of hearts on the internet for good!

The long and dark tunnel appears to be coming to an end, and the festival of lights signifies hope and victory over adversity; here is Asian Paints Diwali Campaign 2021 synonymous with this ambiance and delivers prosperity filled with the sweetness of emotions and sparkling hope.

Since 2014, Sardar Vallabhbhai Patel’s birthday, also known as National Unity Day or Rashtriya Ekta Diwas, has been commemorated on 31st October. He’s famously popular as the “Iron Man of India”. Over 500 princely kingdoms were convinced to join the independent Indian Union, largely thanks to his influence. 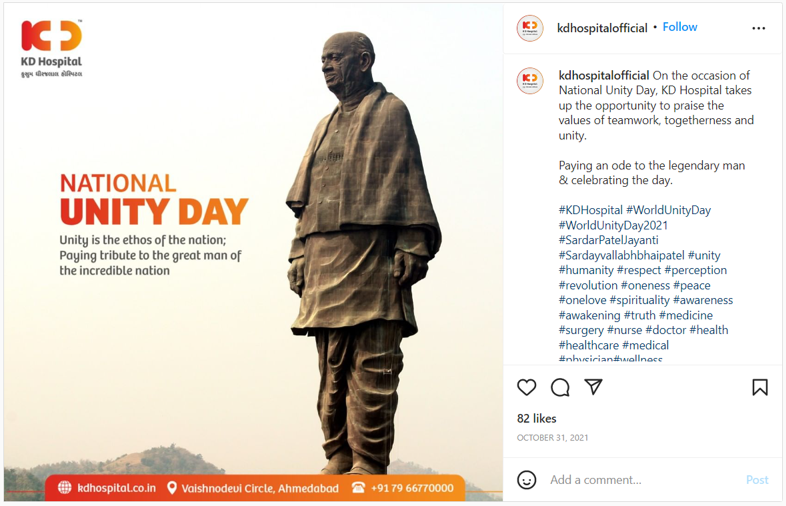 A comprehensive content calendar is an ideal tool to help us pre-plan everything for a successful social media marketing strategy. October will soon arrive! And this month is jam-packed with significant events and festivities. So it’s a fantastic chance for companies and brands to build and strengthen their connection with their target audience. Use October’s content calendar to boost our social media marketing game. This will give us a broader picture and enable us to remain on track and manage everything properly.